We’re going to admit, it’s rare to stick with the same recruitment company for 5 years. Growing from graduate level to a senior position with the same company isn’t the norm for a Millennial or Gen Z’er. There’s a lot of movement in people’s careers now and brand loyalty isn’t often evident in the recruitment industry, let alone at a start-up.

With record breaking numbers amongst a troublesome worldwide pandemic, we’re lucky to have enjoyed consecutive success with our figures but most importantly, with our retentions rates too.

Maybe it’s our genuine culture or we’re lucky to have a few advocates defying all odds. This week we celebrated two 5th work anniversaries at Orbis.

Callum Campbell and Joe Davies joined the team back in January 2016. Without any previous recruitment experience, they were fresh fish to this young recruitment start up.

I had a virtual chat with them both to talk about the early days, their favourite highlights and dive into the real reasons why they’re celebrating 5 years at Orbis.

Let’s go back to the start, what was day 1 like?

Joe: “Orbis was my first job in recruitment, or even a sales related role. I left school at 16 and went straight into a plumbing apprenticeship. So, quite a difference to my skills now! I was thrown into the deep end on my first day, I had to look for a Senior UX Designer for a large bank. I had absolutely no idea what I was looking for. I reported into Alex Stone then who helped me a lot. He had a wealth of knowledge in that area, so I learnt quickly.”

It’s evident the open-door policy has always been a part of the Orbis culture. Having exposure and education from the Directors must have been a wealth of experience in itself?

Joe: “I remember Wayne taking me and Callum into a little meeting room to give us ‘Recruitment 101’ sessions, not a bad person to be learning from!”

What have you seen change most about Orbis since the start, what has changed for the better?

Callum: “The biggest change I’ve seen is within the hiring at Orbis. Originally focussed on graduates, however as time progressed, we’ve hired more senior individuals. The impressive thing about this is how the culture has remained the same, but with new ideas and a variable demographic coming in.”

Joe: “For me, the change I’m most happy about is the dress code. On my first day I was in a suit! I really hate wearing suits or being formal. Now, it’s business casual, which means I have a hoody for my everyday uniform.” 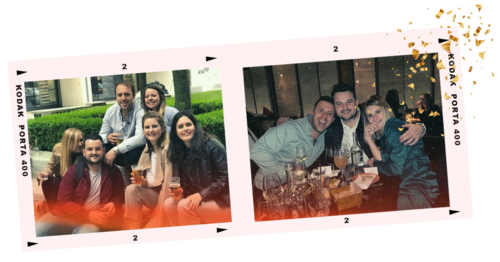 Joe: “Probably my first – Ibiza! There was only 5 of us back then, that’s all I’ll say about that…”

Callum: “Croatia. We had so much fun. We just spent time together doing awesome things – more stories have come from that trip than stag dos and holidays with friends”

What has Orbis got in store for you guys next? Anything on the horizon?

Callum: “I’ll be looking to move to a Director position.”

Joe: “I’ll be hosting more events, creating a new video series and building my personal brand. It’s a recent project, but I’ve loved it. I think joining the Connect team and hosting Code & Create was one of my favourite highlights in the past 5 years.”

What has been your most pivotal moment?

Joe: “I got my first promotion after just 3 months, so managed to get 6 deals in my first 3 months of working at Orbis, which was awesome!”

What is the most attractive part of working at Orbis?

Callum: “The people, I’ve made real friends, even with people who have moved on. Also, a lot of trust is given at Orbis. The team have created a culture where everyone is accountable to themselves and each other. I feel comfortable saying something to the owners if I think something isn’t ok, and they will listen. In turn they hold me accountable if I drop the ball, in a constructive way.”

Joe: “The office and people, it’s always been a great culture. It’s very sociable, which suits me!”

It could be an equation between your own dedication and loyalty, but why are you both still sticking around?

Callum: “Orbis offers support from both a personal and professional perspective. In 2017 my house was broken into and robbed just before Christmas – Everyone at Orbis contributed money and surprised me at the Christmas party so I could replace some of my most important belongings.”

Joe: “It means a lot I think, you don’t often see many people at a company for this long, especially in recruitment. I’ve stuck here because it’s a great company to work for. It’s as simple as that!”